The repeal process for healthcare is ongoing. Markets are liking the fact that earnings are coming in strong. 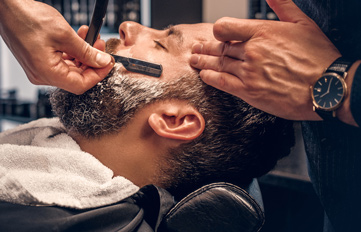 Confidence is up and markets are seeing inflows. But, who is doing the buying? Are there any bears left? No matter -a hot shave will solve all woes.

We discuss the recent earnings from Google/Alphabet as well as market  structure and the LOW level of the VIX.

July is looking like it will go into the books as a positive month for equities. Confidence is high (The Conference Board's Consumer Confidence Index increased to 121.1 (Briefing.com consensus 116.8) in July from a downwardly revised 117.3 (from 118.9) in June. The key takeaway from the report is that the uptick in July was forged by a pickup in sentiment for current conditions as well)

77% of stocks that have reported in the S&P 500 index have bested revenue estimates - that is a very good sign as this has been something that we have been waiting for. 72% of stocks have beaten EPS estimates. (EPS can be manipulated - revenues/sales can't)

VIX! Could be the lowest print in decades - nearing the $8 handle - what does this mean? Are the bears all dead and gone?
- Or just scared out of their minds....?

What we are not hearing ????   Constant Currency (because U.S. Dollar weakness has been a tailwind for earnings)
- In fact - the USD is hitting lows - cutting under $94 today...

In related news: Last week, Amazon teaming up with Sears to sell appliances online -
- The market cap loss in Home Depot, Lowe's, Whirlpool and Best Buy was about $12.5 billion by the end of the day, after falling to more than $13 billion. Amazon stock was up slightly, and Sears closed up about 10 percent.
- Also there have been reports that Amazon hiked retail prices (then applied discount) on some products on Prime Day to make it look like shoppers were getting bargains

Caterpillar earnings beat, McDonald's looking very good. Both at or near all-time highs.

Interesting chart - shows the main buyers of stocks since the 2009 lows.

Regarding the Chipotle (CMG) norovirus - now stories are being pplayed up that it may have been short-sellers that casued the problem. Possibly the work of some nefarious plot to hit share price for profit.

Avacadoflation - How much are avocados in California?

KitKats - not just chocolate anymore. In Japan, Wasabi, Ginger and Sake flavors are among the most popular.

What do we make of this news item?
- Fox News knocked off number one slot as America's most-watched primetime cable network
- The Rachel Maddow Show scooped the most viewers in the sought-after slot of 9 to 10pm

Amazing waste: U.S. Defense Secretary Jim Mattis has criticized Pentagon officials for wasting as much as $28 million by making a questionable choice of forest camouflage-patterned uniforms for Afghan National Army soldiers.
-The uniform pattern was selected without evaluating its effectiveness when only 2.1 percent of Afghanistan is covered by forests, the U.S. government's top watchdog on Afghanistan said in a report last month.
-The Afghan minister of defense at the time "liked the woodland, urban and temperate patterns," the report by the Special Inspector General for Afghanistan Reconstruction (SIGAR) said.

Nice gesture: A Maine man told a 911 dispatcher he was killing himself and first responders needed "to hurry up" because he was an organ donor.
- Skowhegan police Chief David Bucknam says the man was still breathing when first responders arrived Sunday night but he died a few minutes later.

Israel decided on Tuesday to remove metal detectors it had placed at the entrance to a holy site in Jerusalem's Old City and replace them with smart, less obtrusive surveillance means, a Cabinet statement said.
- Israel installed metal detectors at entry points to Al-Aqsa mosque compound in Jerusalem after two police officers were fatally shot on July 14, triggering the bloodiest clashes between Israelis and Palestinians in years.

As part of its review of Amazon's agreement to buy Whole Foods, the Federal Trade Commission is looking into allegations that Amazon misleads customers about its pricing discounts, according to a source close to the probe.
- The FTC is probing a complaint brought by the advocacy group Consumer Watchdog, which looked at some 1,000 products on Amazon's website in June and found that Amazon put reference prices, or list prices, on about 46 percent of them.
- An analysis found that in 61 percent of products with reference prices, Amazon's reference prices were higher than it had sold the same product in the previous 90 days, Consumer Watchdog said in a letter to the FTC dated July 6.

Abdominal adiposity ? or, as it’s sometimes called, sporting a beer belly ? has become a global pandemic, according to a paper published this week in the journal Frontiers in Public Health.
- In some developed countries ? including Iceland, New Zealand and the United States ? up to 90 percent of adult males and 80 percent of women were found to have the condition. In New Zealand and the U.S., more than 50 percent of children were found to have it as well.
- Being “overfat,” as researchers call it, is a condition where the circumference of your waist measures more than half your height. It’s not the same thing as being overweight ? in fact, from a health perspective, it’s worse.