Earnings season is underway and there have been some big winners and some monstrous losers. 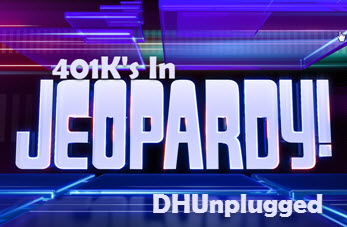 GDP slows as does some other important U.S. economic metrics. The VIX hits single digits this week before it pops higher  – a sign that there is too much complacency in the markets?

New rules being discussed may lose the much coveted tax deduction on 401k plans..

Much more fun and biz discussions …

Crude oil down 12% on the year for 2017. Inventories continue to swell -- even after supposed production cuts by OPEC.
- Broke below $48 today....
The VIX is sub $11 again after a quick move above 15 in mid April - now we shall see what happens with French election as well as the healthcare bill.
U.S. GDP came in at a disappointing 0.7% for the 1st quarter of 2017. This is in stark contrast to the job numbers that may be telling us that this Friday's numbers could be soft.
- What is interesting is that there is all sorts of reasons that talking heads are coming up with to say this was aberration - that 1st quarter is usually soft. BUT - remember last year there was a change to methodology to account for 1st quarter weakness issue?

Bitcoin surged to an all-time high above $1,400 on Tuesday, after more than tripling in value over the past year, with its most recent rise attributed to strong demand in Japan, where the digital currency has been deemed a legal means of payment.

Media getting weirder by the minute: Asked for his assessment of the cable news landscape in the era of President Trump, CNN President Zucker began his reply by saying: “Obviously Fox News is, uh,” then paused for more than 11 seconds. “So, look, there’s three cable news networks. Certainly in primetime and in the morning, Fox is state-run TV and is extolling the line out of the White House.”

The future of 401k plans ? Some talk from White House on removing tax deductibility of 401k plan - that will be a problem
- Looking to recapture tax to put in corporate pockets?
- Will stop many from saving with hope of turning that into spending.
- Impact will be to steal from the future by spending now.
- Govy must be concerned due to April's retail bloodbath - Bebe Stores (closing 180 stores), Neiman Marcus (defaulted on $600 million bonds) , Marsh Supermarkets (Closing 180 stores), Rue21 (closing 1000 stores prepping for bankruptcy), Payless Shoes (Closing 4,000 stores and files Chapter 11)

Apple Earnings: (stock down 2% after hours)

North Korea suggested it will continue its nuclear weapons tests, saying it will bolster its nuclear force "to the maximum" in a "consecutive and successive way at any moment" in the face of what it calls U.S. aggression and hysteria.

Payback:  United Continental Holdings Inc (UAL) said on Friday Chief Executive Oscar Munoz will not become chairman in 2018, under an amendment to his employment agreement approved after an uproar over the treatment of a passenger.
- UAL is up 4% since the incident....

President Trump is pushing for a government shutdown in September as a way to poke congress to get things done - the way that he wants it done.

Reflation trade busted? Did you see that move on US Steel (X) post earnings?

After years of tests, hype and changes, McDonald’s Corp. has finally introduced the product of its customization effort nationwide, in the form of its new Signature Crafted Recipes line of burgers and chicken sandwiches.
- How is the company promoting the products? It invented a new utensil called a “frork.”
- The line includes three varieties: Pico Guacamole, with guacamole, pico de gallo, lettuce and buttermilk ranch sauce; Sweet BBQ Bacon, with grilled onions, applewood-smoked bacon, white Cheddar, barbecue sauce and crispy onions; and Maple Bacon Dijon, with grilled onions, bacon with sweet maple seasoning, white Cheddar, lettuce and Dijon sauce.
- Customers pick one of the recipes and a protein — a burger, or grilled or crispy chicken — and a bun.

Back from CUBA - interesting place.

Remember that company - Hapton Creek - selling "JUST MAYO"? - May be the end of that... Having difficulty raising money and management firing several top players of the firm.

Microsoft has a new $999 laptop - targeting Mac users. Will it work? [LINK]

FACEBOOK has come under fire over revelations it is targeting potentially vulnerable youths who “need a confidence boost” to facilitate predatory advertising practices.
- The allegation was revealed this morning by The Australian which obtained internal documents from the social media giant which reportedly show how Facebook can exploit the moods and insecurities of teenagers using the platform for the potential benefit of advertisers.
- The confidential document dated this year detailed how by monitoring posts, comments and interactions on the site, Facebook can figure out when people as young as 14 feel “defeated”, “overwhelmed”, “stressed”, “anxious”, “nervous”, “stupid”, “silly”, “useless”, and a “failure”.