Bezos makes it up to space – and returns safely. But bond yields keep dropping. 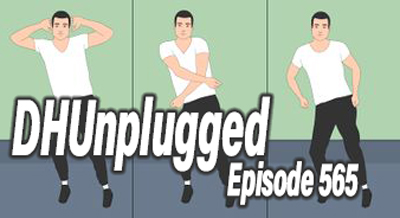 Markets showing an oversold condition, may need some time for consolidation.

Announcing a new Closest to The Pin!

Warm Up
- Markets Worried about COVID - That what the headlines say
- Bezos - Makes it to space and back safely
- A tough week for risk assets - oil starting to turn lower too, bond yields hit the skids.
- A Fishing Tournament Update
- New term in the wild - "Wobble", Markets Wobbled, Inflation Wobbled...

Market Update
- DJIA/Financials/Energy taking a beating (One day flush and hen dip buying steps up) - Crude @ $65
- Sell off in risk assets (too many weak hands in the market)
-Bitcoin and cryptos slump - so much for a non-correlated diversification tool (BTC under 30k)
- Technical levels at risk - S&P 500 at 50 Day, NAZ 100 at critical support, Small-caps down 10%
-- Tuesday Update - From Overbought to Oversold and Overbought in 3 sessions (Same action as a week or so ago - big down = big up)
-- Key Indicators showed overbought for days, then plunge... immediately at oversold (moderate on Monday)
- 10 Year Treasury hits 1.12% Tuesday Morning, then bounces to close at 1.20%

Cardboard Beds
- Olympic athletes will spend their nights on cardboard beds in an effort to discourage casual sex during next week’s contentious Olympic games.
- As reported by Dezeen, the bizarre decision by Olympic officials–who are already dealing with two COVID-19 outbreaks within the Olympic Village–was made in hopes that it will discourage “intimacy among athletes,” American distance runner Paul Chelimo tweeted.
- The 18,000 beds are comprised of frames designed from recycled cardboard, and mattresses are made from three blocks of polyethylene fibers. Each mattress, designed by the Japanese company Airweave, can be further customized with additional layers for comfort.

Netflix Earnings
- Disappointed on subscriber adds and outlook
- Numbers other wise looked good
- Stock took a tumble on the news - but then announcement about gaming??? - stock recovered losses in A/H trade

What is Going On?
- Florida saw a significant jump in the number of new COVID-19 cases in the past couple of weeks as the more contagious Delta variant continued to spread.
- “The viral load in the Delta variant is 1,260 times higher than the alpha variant,” said Florida International University infectious disease specialist Dr. Aileen Marty.
- From July 9th to 17th, there was an 11 percent increase in Delta variant COVID cases.
- Statewide, last week more than 45,600 people tested positive for COVID-19 getting the virus and there were 59 additional deaths. The state’s new case positivity rate stands at 11.5 percent.
- Florida reported 20 percent of the nation’s new coronavirus cases over the last two weeks even though it makes up just 6.5 percent of the population.

BBQ Craze
- Weber, Traeger and BBQGuys - all working on IPOs
- Keep a watch for these - very strong earnings in the post-pandemic world
- Preferred BBQ?

Here We Go...
- The Biden administration on Monday blamed China for a hack of Microsoft Exchange email server software that compromised tens of thousands of computers around the world earlier this year.
- The administration and allied nations also disclosed a broad range of other cyberthreats from Beijing, including ransomware attacks from government-affiliated hackers that have targeted companies with demands for millions of dollars.

Prez Candidate In Making?
- U.S. Representative Alexandria Ocasio-Cortez became one of America's most prominent progressive Democrats with her calls to tax the wealthy and spend heavily to fight climate change.
- Now she is investing heavily in her online store, selling T-shirts, sweatshirts and other merchandise with her name, "AOC" initials or slogans including "Tax the Rich" and "Fight for our Future," efforts aimed at both fundraising and building the second-term lawmaker's profile nationally.

Crypto Crush
- Malaysian authorities seized 1,069 bitcoin mining rigs, laid them out in a parking lot at police headquarters, and used a steamroller to crush them, as part of a joint operation between law enforcement in the city of Miri and electric utility Sarawak Energy.
- Assistant Commissioner of Police Hakemal Hawari told CNBC the crackdown came after miners allegedly stole $2 million worth of electricity siphoned from Sarawak Energy power lines.

HOOD IPO
- Robinhood is seeking a market valuation of as much as $35 billion in its upcoming initial public offering, according to an amended SEC filing.
- The stock trading company will seek to sell at a range of $38 to $42 per share, according to the filing.
- The company is looking to sell 55 million shares at that range to raise as much as $2.3 billion.|
- The company estimates it has 22.5 million funding accounts, up from 18 million in the first quarter of 2021.

Ingenuity
- Johnson & Johnson is exploring a plan to offload liabilities from widespread Baby Powder litigation into a newly created business that would then seek bankruptcy protection
- J&J has not yet decided whether to pursue the bankruptcy plan and could ultimately abandon the idea
- Should J&J proceed, plaintiffs who have not settled could find themselves in protracted bankruptcy proceedings with a likely much smaller company. Future payouts to plaintiffs would be dependent on how J&J decides to fund the entity housing its talc liabilities.

Florida-Migration
- The Walt Disney Company is the latest business to plan to move some operations out of California in favor of a lower-taxed state.
- Disney will move about 2,000 jobs from its California headquarters to a new campus in Florida
- Most of the jobs being moved are professional roles in Disney’s Parks, Experiences and Products division

Anyone Wodering?
- Can't skirt the laws....
- Binance said on Friday it had stopped selling digital tokens linked to shares, as Hong Kong’s financial watchdog became the latest in a string of regulators to crack down on the cryptocurrency exchange platform’s “stock tokens” offerings.
- Stock tokens are digital versions of equities pegged to the value of the relevant share. They are usually bought and sold in fractional units, unlike traditional equities.

Inflation Stupidity
- Treasury Secretary Janet Yellen cautioned Thursday that prices could continue to rise for several more months, though she expects the recent startling inflation run to ease over time.
- In a CNBC interview, the Cabinet official added that she worries about the problems inflation could pose for lower-income families looking to buy homes at a time when real estate values are surging.
- "We will have several more months of rapid inflation," Yellen told Sarah Eisen during a "Closing Bell" interview. "So I'm not saying that this is a one-month phenomenon. But I think over the medium term, we'll see inflation decline back toward normal levels. But, of course, we have to keep a careful eye on it."
- President Joe Biden says price increases in the economy only temporary, Fed should do what's necessary to support the recovery,
- Measuring inflation as growth instead of absolute prices

Social Security Bump
- The Social Security cost-of-living adjustment for 2022 could be 6.1% due to inflation, according to a new estimate.
- That would be the biggest increase since 1983, according to non-partisan advocacy group The Senior Citizens League, which calculated the figure.
- It's also a bump up from last month's estimate, when the increase for next year was expected to be 5.3%.

UK - Level 4
- UK health advisor Patrick Vallance says around 60% of people being admitted to hospital are double vaccinated. He says this is not surprising because UK has a high percentage of population that are vaccinated. He expects to continue to see higher percentages being admitted to hospital that are double vaccinated because the share of vaccinated group is becoming larger and larger.
- Vaccines are highly effective against severe disease.
- UK health officials say hospitalizations will not increase as much as earlier in the pandemic due to protective effects of vaccinations; expects cases to decrease starting after August

Its Official
- The Business Cycle Dating Committee of the National Bureau of Economic Research maintains a chronology of the peaks and troughs of US business cycles. The committee has determined that a trough in monthly economic activity occurred in the US economy in April 2020.
- The previous peak in economic activity occurred in February 2020.
- The recession lasted two months, which makes it the shortest US recession on record.