Race to Space – the next frontier. 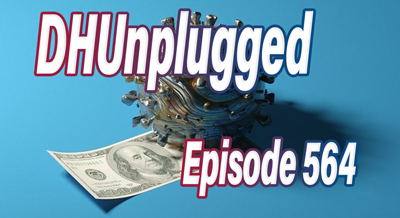 The Pandemic Trade is back!

Warm Up
- And Away He Goes - Branson Goes Up to Space
- Disney making Moves
- South Africa closes restaurants, schools - bans the sale of alcohol
- Australia in lock-down
- Positivity rates moving up in several states
- $5/gal gas ?

Market Update
- Earnings Season Begins - GS and JPM, PEP this morning
- New Highs (Across the board)
- Rotation Back to big Tech (May have Panny Trade again as positivity rising, lockdowns)
- Everything is just fine - just don't look at the bad stuff
- China clamping down - is this protection for citizens, money grab or a lesson?
- Thursday - Rates - Too Much of a Good Thing?
- Inflation - Really HOT

Thursday Rates
- Rates skidded to 1.25% (10yr)
- Markets Spooked... Flight to Safety
- "No Inflation" SEE! I TOLD YOU! (That was transitory)
- Deflation discussion hits markets
- All over by Friday - Record Close

Disney - Weekend Box office
- Walt Disney announces that Marvel Studios’ ‘Black Widow’ surpasses $215 million between box office and Disney+ premier access
- "The Walt Disney Company has announced that Marvel Studios' Black Widow debuted to an estimated total of more than $215 million globally over the weekend, including $80 million in domestic box office, $78 million in international box office and over $60 million in Disney+ Premier Access consumer spend globally."
- NEWS: ESPN+ price will increase to $7/month from $6 starting next month. The company has pricing power for its DTC streaming services, which also create a flywheel with its other assets.

More Covid
- Thailand has changed its vaccine policy to mix China's Sinovac with the AstraZeneca vaccine in a bid to boost protection.
- Mix and match - just shove something in the arm

Pfizer
- Pfizer and BioNTech announced Thursday they are developing a Covid-19 booster shot intended to target the delta variant as concerns rise about the highly transmissible strain that is already the dominant form of the disease in the United States.
- CDC not so happy with this announcement
- Still have not got full approval for basic vaccine

ELON
- Court trial regarding SolarCity acquisition - Inferred he does not like being CEO of TESLA
- Musk said in his testimony Monday that he’s tried “very hard not to be the CEO of Tesla, but I have to or frankly Tesla is going to die.”

OPEC
- Disagreement within OPEC could trigger a more a volatile period for oil, with prices jumping on lack of new supply or sinking suddenly if member countries decide to release crude independently.
- Some predicting that prices will jump regardless of demand
- Who said it should be fair? What happened to supply/demand (Where demand leads???)

More Virgin Galactic
- Elon Musk Just Bought a Ticket to Fly With Virgin Galactic to the Edge of Space
- In a statement for the Wallstreet Journal, Virgin Galactic said that Musk bought a ticket aboard the company's air-launched spacecraft.

Wells Fargo
- More Stink
- Wells Fargo is ending a popular consumer lending product, angering some of its customers, CNBC has learned.
- The bank is shutting down all existing personal lines of credit in coming weeks and no longer offers the product, according to customer letters reviewed by CNBC.
- The revolving credit lines, which typically let users borrow $3,000 to $100,000, were pitched as a way to consolidate higher-interest credit card debt, pay for home renovations or avoid overdraft fees on linked checking accounts.
- "Wells Fargo recently reviewed its product offerings and decided to discontinue offering new Personal and Portfolio line of credit accounts and close all existing accounts," the bank said in the six-page letter. The move would let the bank focus on credit cards and personal loans, it said.

De beers - Diamonds
- Raising prices on diamonds an average of 5%

BNPL - LAAS
- Apple Inc. is working on a new service that will let consumers pay for any Apple Pay purchase in installments over time, rivaling the “buy now, pay later” offerings popularized by services from Affirm Holdings Inc. and PayPal Holdings Inc.
- This is just the worst idea - hazard to the micro lenders and just one  more Life-As-A-Service
- The upcoming service, known internally as Apple Pay Later, will use Goldman Sachs Group Inc. as the lender for the loans needed for the installment offerings,
- The service is currently planned to work as follows: When a user makes a purchase via Apple Pay on their Apple device, they will have the option to pay for it either across four interest-free payments made every two weeks, or across several months with interest, one of the people said. The plan with four payments is called “Apple Pay in 4” internally, while the longer-term payment plans are dubbed “Apple Pay Monthly Installments.”
- Affirm charges as much as 30% APR, while other rivals charge less, Affirm fell as much as 13% on the news, while PayPal declined about 1.4%.

AND Inflation Again
- Americans' inflation fears reached a fever pitch in June, rising to the highest level since June 2013 as the price of consumer goods continued to surge, according to a Federal Reserve Bank of New York survey published Monday.
- The median expectation is that the inflation rate will be up 4.8% one year from now, a new high for the gauge, and up 3.6% three years from now, the highest level since August 2013, according to the New York Federal Reserve's Survey of Consumer Expectations.

CPI Report
-  The headline and core number both came in hotter than expected. This was the largest 1-month change since June 2008 when the index rose 1.0 percent.
- Over the last 12 months, the all items index increased 5.4 percent before seasonal adjustment; this was the largest 12-month increase since a 5.4-percent increase for the period ending August 2008.
- The index for used cars and trucks continued to rise sharply, increasing 10.5 percent in June. This increase accounted for more than one-third of the seasonally adjusted all items increase.
- The food index increased 0.8 percent in June, a larger increase than the 0.4-percent increase reported for May.
- The energy index increased 1.5 percent in June, with the gasoline index rising 2.5 percent over the month.
- YIELD WENT DOWN AFTER MARKET OPENED (then crept toward 1.4%) - Only can mean one thing!

China - After Didi
- China's antitrust regulator is set to order the music streaming arm of Tencent Holdings Ltd to give up exclusive rights to music labels which it has used to compete with smaller rivals, two people with knowledge of the matter said on Monday.
- The State Administration of Market Regulation (SAMR) will also fine it 500,000 yuan ($77,150) for lapses in reporting the acquisitions of apps Kuwo and Kugou, the people told Reuters - a milder penalty than the forced sale indicated earlier this year.
- ByteDance (TikTol) pulls IPO

Boeing
- Shares of Boeing fell more than 3%. The plane maker cut production of its 787 Dreamliners after a new flaw was detected on some of the jets.
- Boeing also cut its delivery target for the planes.

The CTP for Grayscale Bitcoin Trust

Tokyo Olympics
- Alcoholic beverages will be banned at the Olympics, Tokyo 2020 President Seiko Hashimoto said on Wednesday, adding that the decision was made in the interest of removing the public's concern over a "safe and secure" Games.
- Now all spectators will be banned

SMARTY
- Russian expatriate Katie Ananina has spent the last three years helping people dodge taxes on their bitcoin gains. It is all part of her mission to stick it to the man, one case of tax avoidance at a time.
- As the name suggests, Plan B Passport offers crypto-rich clients a path to a second passport in their pick of seven, mostly tropical, tax-haven states, all of which are exempt from capital gains taxes on crypto holdings.
- US Citizens will need to renounce citizenship not to be taed on crypto profits
- "In Saint Lucia you can obtain citizenship by an investment of between $100K (donation), $250K (government bonds) or $300K (real estate),"