Hedge funds blowing up after taking on massive leverage in concentrated positions. 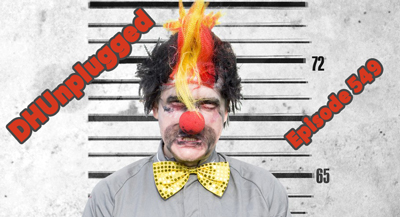 Yields are moving up again – capping one of the worst quarters for bonds in decades.

Market Update
Rate Stabilization - Then a Gap to 1.7% again on Monday, 1.75% today before easing back slightly
Friday - Biggest final hour move (up) in many many months
Markets in churn and burn mode - holding up average but underneath there is carnage
Massive losses for MOMO traders - especially those chasing ARK Funds
Bracing for a ~$4 trillion infrastructure plan with MASSIVE tax hikes

BLOWING UP - Story of the Year
- A trader who participated in some of the wild trading in Chinese internet stocks on Friday confirmed that the primary cause of the selling in Chinese stocks was that a fund, Archegos Capital Management, was forced out of its positions.
- Bill Hwang’s Archegos Capital and  Tao Li of Teng Yue Partners were at the  center of the problem.
- (Bill Hwang was found guilty of insider trading in 2012 and fined $60 million - banned from trading in Hong Kong, created family office)

Sequence of events:
1. The catalyst was ViacomCBS, which did a $3 billion stock offering through Morgan Stanley and J.P. Morgan earlier in the week that fell apart. It resulted in massive selling. This fund was long a lot of Viacom using a lot of leverage.
2. The dramatic drop in Viacom's price resulted in margin calls. Archegos was also long many China internet names that traded in the U.S.
3. Goldman Sachs, Morgan Stanley, Credit Suisse, and Deutsche Bank all forced Archegos to liquidate many of the China internet names through unregistered trades, according to the trader. Late in the day Friday, Goldman took many of the names held by Archegos onto their balance sheet then liquidated by distributing to clients.
4. Much of this trading was difficult to see because many of the big trades were done over the counter and not printed.

Ripple +
- Credit Suisse warned Monday of a "highly significant" hit to its first-quarter results, after it began exiting positions with a large U.S. hedge fund that defaulted on margin calls last week. (Could be $7 billion)
- Nomura also issued a trading update on Monday warning of a "significant loss" at one of its U.S. subsidiaries resulting from transactions with a client stateside. Japan's largest investment bank said it was evaluating the potential extent of the loss, estimated at $2 billion.
- What other names will be taking some hits? (Seems Goldman broke ranks and unloaded early, saving them from losses)
- Why are hedge funds able to go to many banks/institutions for funds without risk management oversight?
--- Like someone leveraging my house with 5 banks at the same time.

China Doing Well
- Annual profits at China’s industrial firms surged in the first two months of 2021, highlighting a rebound in the country’s manufacturing sector and a broad revival in economic activity from the coronavirus crisis early last year.
- Profits stood at 1.114 trillion yuan ($170.31 billion) in the first two months of 2021, up 179% from the same period last year when the COVID-19 pandemic paralyzed economic activity, data from the National Bureau of Statistics (NBS) showed on Saturday.
- They were also up 72.1% from the 2019 levels, bringing the two-year average growth to 31.2%, according to NBS. Profits had risen 20.1% in December.

MORE MONEY!
- $2.25 TRILLION - Part 1
- Biden’s plan will include approximately $650 billion to rebuild the United States’ infrastructure, such as its roads, bridges, highways and ports, the people said.
- The plan will also include in the range of $400 billion toward care for the elderly and the disabled, $300 billion for housing infrastructure and $300 billion to revive U.S. manufacturing.
-It will also include hundreds of billions of dollars to bolster the nation’s electric grid, enact nationwide high-speed broadband and revamp the nation’s water systems to ensure clean drinking water, among other major investments, the people said.
- PLUS tax hikes! - White House press secretary Jen Psaki has said the proposal will be paid for in new tax hikes, particularly on corporations, seeking to reverse much of President Donald Trump’s 2017 tax law.
- AND  they are working on a second package is expected to include an expansion in health insurance coverage, an extension of the expanded child tax benefit, and paid family and medical leave, among other efforts aimed at families, the officials said. White House officials have not explained whether they will seek to have both efforts pass at the same time or try to get Congress to approve one first.
- The combined price tag of the plans could top $4 trillion.

OppsPoops
- Jessica Richman and Zachary Apte, the cofounders of the now shuttered microbiome company uBiome, are facing criminal and civil charges stemming from their efforts to build uBiome into a poop-testing powerhouse.
- The SEC complaint alleged Richman, 46, and Apte, 36, portrayed uBiome as receiving health-insurance reimbursements for its tests, which tested poop samples for different conditions related to gut health. The complaint alleged the cofounders made millions as uBiome raised money from investors.

Bitcoin Energy Usage
- Bitcoin's energy consumption is comparable to that of major corporations like American Airlines, which flies over 200 million passengers a year, and even the entire US federal government, which employs 2 million people, according to research on Wby Bank of America
- Each $1 billion in inflows into bitcoin uses the same amount of energy as 1.2 million cars, estimates the report
- Bitcoin uses as much power as a small, developed country like Greece, which has a population of over 10 million people

Poor Hard Working Bankers
- Goldman Sachs - a group of first-year analysts have warned senior management that they are overworked and will quit within six months unless conditions improve
-Jjunior bankers said that they worked an average of 95 hours a week, slept five hours a night, frequently faced “unrealistic deadlines,” and that their relationships with friends and family were feeling the strain as a result
- A majority of the Goldman analysts in the survey said they felt they have been victims “of workplace abuse.”
- “There was a point where I was not eating, showering or doing anything else other than working from morning until after midnight,” wrote one respondent.
- Maybe the new ZOOM FREE FRIDAYS will help?

SPACs Targeted
- The U.S. securities regulator has opened an inquiry into Wall Street's blank check acquisition frenzy and is seeking information on how underwriters are managing the risks involved, said four people with direct knowledge of the matter.
- The U.S. Securities and Exchange Commission (SEC) in recent days sent letters to Wall Street banks seeking information on their special purpose acquisition company, or SPAC
- The SEC letters asked the banks to provide the information voluntarily and, as such, did not rise to the level of a formal investigative demand

BoatyMcStuckBoatFace
- The Ever Given, the massive container ship that became wedged in the Suez Canal and cut off traffic in the vital waterway for almost a week, has been refloated,
- ~10-15% of global supply passes through the Suez Canal
- Lloyd’s List estimates that more than $9 billion worth of goods passes through the 120-mile waterway each day, translating to around $400 million per hour
- Sandstorm? Come on.......

ELON
- Elon Musk took to Twitter to make quite a prediction about his electric vehicle company, Tesla.
- “I think there is a [greater than] 0% chance Tesla could be the biggest company,” the CEO tweeted Friday, referring to the potential for his company’s full self-driving software to create new stock market value “probably within a few months.”
- Later, Musk later deleted the tweet.
- What happened to the mandated oversight of his Tweets? Are there no regulations that have teeth?
- Part of the problem is that there are no ramifications that are significant enough to dissuade bad behavior.

GLASSES AGAIN
- Snap is readying a new push into hardware with a more advanced version of its Spectacles smart glasses that feature displays capable of augmented reality effects, according to two people with direct knowledge of the device. It has also revived a years-long effort to build a drone.
- What is the fascination?

Weird
- The Minnesota Supreme Court last Wednesday ruled that a man who had sex with a woman while she was passed out on his couch cannot be found guilty of rape because the victim got herself drunk beforehand.
- Minnesota is one of the many states that says that for a victim to be too mentally incapacitated to give consent, they must have become intoxicated against their will, such as if a person secretly drugged someone's drink