Trouble in Turkey, the Lira plunges. Vanguard out cautious on Cryptos, what is up with this? 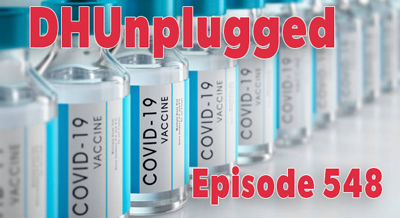 Andrew gets jabbed, flushing out the twisted rationale.

An update on the Ole’ Codgers vs. Millennial battle.

PLUS – The base effect related to upcoming inflation data.

Base Effect
- Inflation on YoY basis going to show big gains against base data
- Feb - April 2020 had massive deflation due to lockdowns
- Next few months will show big gains on prices - is this priced in already?

SLR - Supplemental Leverage Ratio
Important to understand - Lots of listener questions on this:
- From Briefing.com
-- The Federal Reserve announced a short time ago that the temporary change to the supplemental leverage ratio ("SLR") issued on May 15, 2020, will expire as scheduled on March 31. Briefly, the temporary change enabled depository institutions to exclude Treasury holdings when calculating their SLR. The thinking being that it would promote more flexibility to provide credit to households and businesses during the depths of the pandemic.
-- The U.S. economy is no longer in those "depths," so as a practical matter it is understandable that the Fed would let this exemption expire. Banks have reportedly been bracing for this possibility by offloading Treasuries in recent weeks. According to Bloomberg, primary dealers have unloaded $80 billion of Treasury securities in just the last two weeks.
-- That selling has contributed to the uptick in long-term rates, so it is also understandable that there has been some knee-jerk selling interest in the Treasury market following the announcement from the Fed today. The yield on the 10-yr note, which flirted with 1.67% overnight, came up to test 1.72%. As it did, equity futures were rolled back.

Turkey - Once Again
- Turkey’s lira fell dramatically on Monday morning after President Recep Tayyip Erdogan fired the country’s central bank chief — the third to be fired in two years — sending shockwaves through the investor community.
- The currency plunged more than 16% in early morning Asian trading, according to analysts, hitting 8.4 against the dollar compared to a close of 7.21 on Friday.
- Turkey ETF (TUR) - down 18% Monday

Vanguard - Trashing Cryptos
- While Morgan Stanley, Balckrock and others trying to promote - Vanguard out with cautious note
- "The fact that cryptocurrencies are not issued by a central bank is actually the very reason why they can't achieve the quality of other well-accepted currencies," Aliaga-Díaz explained. "The role of a central bank is precisely to preserve the value of the currency by keeping inflation under control. That's why prices are more predictable under Federal Reserve management of the U.S. dollar money supply."
- Link to Vanguard Commentary [LINK]

China Cracking Down on E-Cigs
- The Ministry of Industry and Information Technology (MIIT) and China’s State Tobacco Monopoly Administration, posted online the draft regulations that could potentially curb a fast-growing industry.
- Cigarette sales generated 5.45% of China’s overall tax revenue in 2018.
- Looks like a money grab

Intel Announcement
- Company announced significant manufacturing expansion plans, starting with an estimated $20 bln investment to build two new factories (or "fabs") in Arizona.
-----These fabs will support the increasing requirements of Intel's current products and customers, as well as provide committed capacity for foundry customers.
-----This build-out represents an investment of approx. $20 bln, which is expected to create over 3,000 permanent high-tech, high-wage jobs; over 3,000 construction jobs; and approx. 15,000 local long-term jobs.
------Intel expects to accelerate capital investments beyond Arizona, and Gelsinger said he plans to announce the next phase of capacity expansions in the US, Europe, and other global locations within the year.
- ALSO: Intel expects Q1 results to be better than prior guidance but guides FY21 EPS below consensus as PC revenue will be tempered by industry-wide component shortages

AH Gets first Jab Today - Why if Already Had Covid?
JCD - Choose all that are correct about Andrew's rationale:

1) Loves to waste time in lines and visit medical professionals
2) Scared of catching it again
3) More afraid of wife than side effects
4) Gave in to social pressure
5) What can it hurt?
6) Wants to travel and figures that will eventually will need vaccine passport
7) Owns Pfizer and/or Moderna Stock
8) To be a good citizen of the world
9) Setting a good example
10) Proving to sister that there are no trackers put in by Bill Gates

Biden Nomination
- President Biden nominates big technology company critic Lina Khan as FTC Commissioner
- Has written papers on anti-trust in tech space and advocate of potential break-ups.
- Negative for tech - but not clear if nomination will get approved

NFTs Stink?
- A Brooklyn-based film director is simultaneously mocking and attempting to profit off the cryptocurrency craze for non-fungible tokens (NFTs) by selling a year’s worth of fart audio clips recorded in quarantine.
- “If people are selling digital art and GIFs, why not sell farts?” Alex Ramírez-Mallis, 36, told The Post of his addition to the blockchain-based NFT market.

Amazon - Gets NFL
- The National Football League (NFL) said on Thursday it reached long-term media deals with Amazon.com Inc and major broadcast and cable companies that run through 2033.
- Amazon.com will become the exclusive partner for the league’s “Thursday Night Football” games. The NFL also made deals with Walt Disney Co’s ESPN and ABC networks, ViacomCBS Inc, Fox Corp and Comcast Corp.
- When will betting come with streaming alternatives - embed right in the app?

MIAMI - Spring Break
- The place to be it seems
- Law enforcement officers from at least four other agencies, along with SWAT teams, were added to help contain the raucous crowds on Souoth Beach, but it wasn’t enough.
- After days of partying, including several confrontations with police, Miami Beach officials enacted a highly unorthodox curfew Saturday from 8 p.m. until 6 a.m., forcing restaurants to stop outdoor seating entirely during the three-day emergency period, and encouraging local businesses to voluntarily shut down.
- Seems like the curfew may be in effect through April 12?