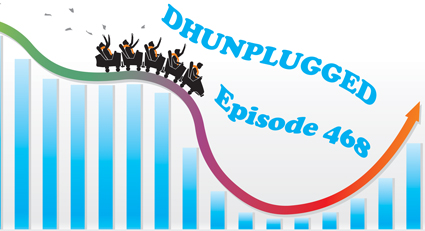 Argentina stock market plunges and President Trump backs off on some tariffs.

Massive volatility - headlines crushing stocks - the roller coaster graphic is back!
Recession indicators are flashing warning
Bond yields plummet (low yields supposed to be good - but....)
Argentina Markets sell of 48% in 1-day!
Tariffs on some tech may be delayed - Market JUMP Tuesday

Inflation Update
- U.S. consumer prices rose at a robust pace in July on the back of higher prices for energy and most other goods and services, a possible sign that inflation is finding its footing after a weak start to the year.

Tariff Update
- The U.S. will delay some tariffs against China until Dec. 15 on items including cellphones and laptops that had been set to take effect Sept. 1.
- President Trump wants to hold off until after holiday shopping season for certain goods (but wasn't China paying anyway?)

Sneaker Subscriptions
- Nike Inc will launch a new subscription service for kids sneakers this week that seeks to woo parents with an offer of fewer nightmarish trips to the shoe store in exchange for a regular fee and consistent brand loyalty.
- Aimed at the U.S. kids shoe market, estimated at an annual $10 billion, “Adventure Club” builds on Nike’s SNKRS app, which notifies shoppers every time it launches a new shoe or has an exclusive sneaker at a nearby store.

TUMBLr
- Verizon Communications Inc said on Monday it would sell its blogging website Tumblr to Automattic Inc, the owner of popular online-publishing tool WordPress.com.
- The company did not disclose the terms of the deal.

Election Rejection
- The surprise outcome in Argentina’s primary vote roiled the nation’s financial markets, sending the S&P Merval Index plunging 48% in dollar terms.
- That marked the second-biggest one-day rout on any of the 94 stock exchanges tracked by Bloomberg going back to 1950. Sri Lanka’s bourse tumbled more than 60% in June 1989 as the nation was engulfed in a civil war.
- ETF Symbol ARGT

Overage
- The new twin Air Force One jets, the total cost is now $1.2 billion more than the original price Trump complained about.
- Trump squawked after his election that the $4 billion price-tag he cited for the Boeing 747s modified for presidential use was “out of control.” He tweeted: “Cancel order!”

It Is Happening
- U.S. package delivery company FedEx Corp will terminate its contract at the end of this month for small-package ground deliveries with Amazon.com
- The move comes two months after FedEx decided not to renew its contract with Amazon for U.S. cargo delivery through its plane-based express service.

Pulling the Card
- Washington accused Beijing of manipulating its currency after China let the yuan drop to its lowest point in more than a decade.
- The U.S. Treasury Department announced late on Monday that it had determined for the first time since 1994 that China was manipulating its currency, knocking the U.S. dollar sharply lower and sending gold prices to a six-year high.

Global Economy Slowdown Impact
- Luxury home prices across 46 major cities grew at an anemic 1.4% in the second quarter of this year compared to a year ago, according to a quarterly index released Monday from brokerage Knight Frank.

Facebook - Pure Evil
- Bloomberg report that it paid contractors to transcribe user audio; the company has paused that practice
- Facebook confirmed that it had been transcribing users’ audio and said it will no longer do so. “We paused human review of audio more than a week ago,” the company said Tuesday.
- The company said the users who were affected chose the option in Facebook’s Messenger app to have their voice chats transcribed.
- The contractors were checking whether Facebook’s artificial intelligence correctly interpreted the messages, which were anonymized.

The Closest to the Pin
Bank of America (BAC)

Scooter Dilemma
- Electric scooter startups have been grappling with an unexpected problem that’s been laying waste to the two-wheeled vehicles: Europe’s cobbled streets.

Amazon vs. CVS and Walgreens
- PillPack has run into a significant roadblock in getting prescription transfers approved. CVS and Walgreens are rejecting an increasing number of their requests, claiming that PillPack isn't getting proper consent from patients. PillPack says it always gets patient approval before making transfer requests and blames the pharmacy giants for unfairly refusing to honor them, sometimes hanging up on PillPack's pharmacists or throwing the request forms in the trash.

Congrats!
- A Lithuanian couple won the World Wife-Carrying Championship for a second time in a row in the Finnish town of Sonkajarvi on Saturday, triumphing in a contest where men complete an obstacle course with their wives slung over their shoulders.