Rhetoric about the tariffs and who is actually paying is getting thick. markets smell a rat in the process and are starting to figure this out. 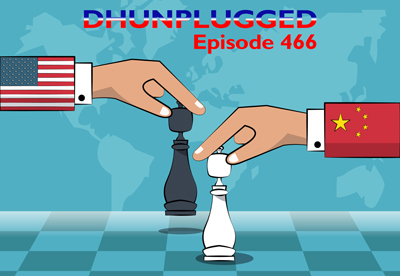 We take a look at why markets are reacting so violently, look at the news that is moving stocks and more.

Trade WAR - YES WAR!
Markets Dump - worst week of 2019
...But bounce on nice talk about deal the day after
Uber/LYFT IPOs off to BAD start

Remember we discussed MELT-Up ? What happened?
China Trade deal seems to be stuck - tariffs increase to 25% on $200 billion
New $300++ billion being discussed
Trump still trying to push the idea that China pays the Tariffs
China retaliates pushing up tariffs and targeting specific companies (and looking at dumping treasuries)

Kudlow Corrects the Record
- White House economic adviser Larry Kudlow on Sunday offered a “both sides” take in an interview on Fox News.
- He was acknowledging that China, in fact, does not directly pay tariffs on goods coming into the U.S., breaking with President Trump’s insistence that it does.
- Audio

RIDESHARING
- Uber Shares Sink Below $40 on Second Day of Trading
- LYFT still dropping
- What will this do to other money losing IPO candidates?

UBER Naked Short
- Uber’s underwriters, led by Morgan Stanley, were so worried the company’s initial public offering had run into trouble, they deployed a nuclear option ahead of the deal last week, so they could provide extra support for the stock, four people with knowledge of the move said.
- This level of support, known as a “naked short,” is a technique that goes above and beyond the traditional help a new offering can get.
The efforts didn’t stop Uber from falling 18 percent in its first two days of trading as heavy trading volume ate away at the banks’ ability to support the stock price.

TAXI?
- There is some talk that Medallion Financial (MFIN) may benefit from ride-sharing woes.
- Shares of the specialty finance company -- which is known for offering consumer loans to purchase taxi medallions, although that’s a shrinking part of its business -- have rallied sharply this year, recently closing near a three-year high.

Influencers
- Cigarette maker Philip Morris International Inc has suspended a global social media marketing campaign in response to Reuters inquiries into the company’s use of young online personalities to sell its new “heated tobacco” device, including a 21-year-old woman in Russia.
- The company’s internal “marketing standards” prohibit it from promoting tobacco products with youth-oriented celebrities or “models who are or appear to be under the age of 25.”
- The company told Reuters of the decision late Friday, saying it had launched an internal investigation into marketing posts and photographs that Reuters sent to the company for comment earlier this week.
- They included a paid post plugging the tobacco product by social media “influencer” Alina Tapilina in Moscow - who listed her age as 21 on Instagram - alongside often seductive photos of herself drinking wine, swimming and posing with little clothing in luxurious settings.

Rise of the Machines
- Amazon started adding technology to a handful of warehouses in recent years, which scans goods coming down a conveyor belt and envelopes them seconds later in boxes custom-built for each item, two people who worked on the project told Reuters.
- Amazon has considered installing two machines at dozens more warehouses, removing at least 24 roles at each one, these people said. These facilities typically employ more than 2,000 people.
- That would amount to more than 1,300 cuts across 55 U.S. fulfillment centers for standard-sized inventory. Amazon would expect to recover the costs in under two years, at $1 million per machine plus operational expenses, they said.

Tough Date
- Armed gang posed as single women on Tinder to lure men — then allegedly beat and robbed them at gunpoint
- Police in San Jose, Calif. arrested five people for allegedly staging a series of armed robberies, assaults and carjackings by asking unsuspecting men to meet “Victoria” or “Becky,” two fictional profiles they set up on the location-based dating app Tinder.
- The suspects, three males and two females, range in age from 15 to 19.

WhatsApp Malicious Spyware
- Facebook needs a few adults running their security at all levels
- WhatsApp, the messaging and audio app owned by Facebook said Monday that malicious hackers were able to install spyware on Android smartphones and Apple iPhones.
- The surveillance software could be remotely installed on a user’s phone by calling them over the internet (using “VOIP” or voice over internet protocol). Earlier this month, WhatsApp identified and fixed a vulnerability that could enable an attacker to add spyware to device

WINNER of Closest to the Pin - LYFT (LYFT)

Social Media Blamed
- Roughly two in three millennials think that social media has a negative impact on their financial well-being, according to a 2018 survey of more than 2,000 millennials from financial firm Fidelity.
- This is partly because millennials say they feel pressure to keep up with their friends’ spending — and of those, nearly half say that social media posts of friends’ vacations and lifestyles contribute to that pressure, according to 2017 data from TD Ameritrade.
- Social media also makes 61% of millennials (versus just 35% of Gen Xers and 12% of boomers) feel inadequate about their own life and what they have, with 88% comparing themselves to others on social media

UPDATE
- A final update from the Denver Election Division on Wednesday afternoon revealed that voters approved a measure to decriminalize psychedelic mushrooms, CBS Denver reported. The vote came in as 50.56% yes to 49.44% no.
- The numbers are still "unofficial until the Canvass and Certification of the Municipal General Election on May 16." The margin for recount stands at one-half of one percent.

1. Vanilla flavoring is sometimes made with the urine of beavers.

2. Times Square was originally called Longacre square until it was renamed in 1904 after The New York Times moved its headquarters to the newly built Times Building.

3. Only official members of a federally accepted Native American tribes may legally possess or collect eagle feathers. If a normal citizen has one, it is illegal.

4. Several of the facts on Snapple caps have been found to be outdated, incorrect or exaggerated.

5. Chewing gum boosts mental proficiency and is considered a better test aid than caffeine – but nobody knows why.

6. If you cut a starfish, it won’t bleed – it doesn’t have blood! Rather, they circulate nutrients by using seawater in their vascular system.