Bond yields have hit their highest levels since 2014. With easy money part of the explanation why stock valuations are stretched – will this cause some panic in the street? 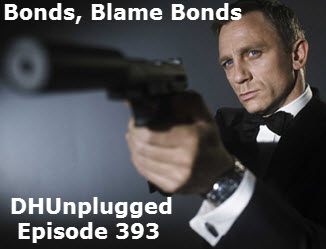 Big downside moves for markets all of a sudden that has the VIX hitting multi-month highs.

Earnings season is playing out well so far and this week we will see 20% of the S&P 500 companies report. Some big names may help the markets in the next leg of a move.

UPDATE - Something happened - Seems sellers stepping in out of nowhere - DJIA down 500+ in 2 days. (was off 400 pts at one time on Tuesday morning, finished down 362)

One of the reasons for the drop was UnitedHealth Care (UNH) that took 75 pts from DJIA
- News Amazon, Berkshire Hathaway and JPMorgan Chase & Co. are combining efforts to improve health care and lower its cost for their hundreds of thousands of U.S. employees.
- The three companies announced Tuesday they are teaming up to explore "ways to address healthcare for their U.S. employees, with the aim of improving employee satisfaction and reducing costs," according to a news release about the venture.
- An independent company, which "is free from profit-making incentives and constraints," they say, will initially tackle technological solutions to deliver "simplified, high-quality and transparent" health care to employees at a economical prices.

Coming up this week is the employment report for January
- Expectations are for a gain or 190k and a 4.1% unemployment rate.

Treasury yields are arisin'. Highest level since 2014 now - ahead of next rate decision (tomorrow at 2pm - Yellen's last meeting)
- Is this the start of JCD's bond cycle bust?
- If the stock market takes heat - we can blame bonds - Bonds, Blame Bonds....
- FWIW - with yields coming up - Equity markets had their worst day of 2018 on Monday

HOWEVER - From TrimTabs:
Demand for bond funds has exploded in January after moderating in November and December.
- The inflow of $38.2 billion into bond MFs and ETFs this month through Thursday, January 25 is on track to be the highest since October 2009, driven by an estimated inflow of $32.3 billion into bond MFs.
- Bond funds had negative returns in four of the past five months, and their popularity amid lackluster performance should concern contrarians.

Apple: iPhone expectations are still too high for C1Q and C2Q; iPhone X demand not living up to expectations -- Deutsche Bank

Twitter - rumors circulating that Salesforce may make an offer - plus several newsletter mentions that this is the Year-of-Twitter.
- Stock up 10% on the news
- UPDATE - NEW INFO -- Now rumors that the company is looking to sell itself lifts stock another 4%

Intel - after all of the problems associated with the chips of late - company posts a great quarter and breaks out to all-time-highs.

Big week for tech earnings - Microsoft after the close on Wednesday - Apple, Amazon and Google on Thursday.
PLUS a few hundred other names will be reporting as well.

STEVE WYNN (Next Phase about to begin in the #Metoo)
- Dozens of People Recount Pattern of Sexual Misconduct by Las Vegas Mogul Steve Wynn Wynn Resorts employees and others described a CEO who sexualized his workplace and pressured workers to perform sex acts.
- Mr. Wynn responded: ‘The idea that I ever assaulted any woman is preposterous.’
- Stock down 10% in reaction (Friday)
- Down another 8% Monday

Dell is considering a reverse merger with VMWare (VMW) so they can avoid an IPO.
- Dell currently owns 80 percent of VMware.
- The deal would give Dell shareholders a way to profit from having taken Dell private in 2013 and help pay off some debt.
- VMWare stock off by 12%+ on the news

GBTC (bitcoin ETF) completes the 91/1 reverse split. Now trading at $17.96~
- Plenty of people buying this as a proxy for Bitcoin, even though massive premium to NAV

Dame Amanda of the Nor'East D-

More companies are hiking wages and salaries than at any time over the last 18 years, according to a survey of business economists released Monday.
- The National Association for Business Economics said the net percentage of those companies which have increased wages and salaries over the last three months rose to 48 in January, up from 37 in October and the third-highest reading since April 1982.

The number of deaths caused by workplace accidents in China fell 12.1 percent to 38,000 in 2017 compared to the previous year, state media reported on Tuesday, citing figures from the country’s safety watchdog.
- But fines for work safety violations rose 58 percent in the year to around 3.3 billion yuan ($521.10 million)

OVERDOSE
- Over the past decade, out-of-state drug companies shipped 20.8 million prescription painkillers to two pharmacies four blocks apart in a Southern West Virginia town with 2,900 people, according to a congressional committee investigating the opioid crisis.
- The House Energy and Commerce Committee cited the massive shipments of hydrocodone and oxycodone — two powerful painkillers — to the town of Williamson, in Mingo County, amid the panel’s inquiry into the role of drug distributors in the opioid epidemic

OOPS! said on Monday the U.S. Securities and Exchange Commission was looking into the insurer’s failure to pay some workers’ pensions.
- MetLife, in a statement, said the SEC’s enforcement staff has inquired about payments that the insurer failed to make for roughly 600,000 people who receive a type of annuity benefit from the company via its retirement business.
- The New York insurer said it expects to increase reserves in total between $525 million and $575 million on a pre-tax basis.
- That would result in a hit to fourth-quarter earnings of between $135 million and $165 million, the company said.

Always looking for an angle:
Small financial firms, backed by hedge funds, are angling for business from sexual harassment victims.
- Companies that offer money to plaintiffs in anticipation of future legal settlements are racing to capitalize on sexual harassment lawsuits.
- Similar to the Payday loan business

Indonesia’s parliament is drafting proposed revisions to the national criminal code that could ban all consensual sex outside marriage, sparking alarm among activists who it would breach basic rights and could be misused to target the LGBT community.