Greek debt write-downs will wait until at least 2018 says Germany. Retail sales in the U.S. are still feeling the pain as the latest report from Best Buy (BBY) shows a rather miserable outlook ahead. 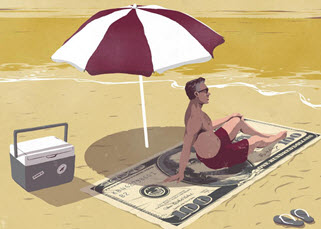 Volumes are slowing into the summer and M&A rumors as well as upgrades by Sell-side should be in full swing. Markets choppy, one day up and one day down. The cycle could play out for the foreseeable future.

A smattering of interesting news that may move markets and a few stock picks in this episode.

Interesting - over the past 10 trading days - every other day is up or down. Seems that there is no direction... Volumes starting to dry up into summer so.... There will be more rumors about M&A and upgrades by sell-side analysts to keep things on a happy note for markets.

Uber announces a leasing program available for "$250" for a car. Different cars, but when you look into it, $116- $150 per week for 150+ weeks. Cost is deducted from your Uber earnings. How is this going to play?

Follow up on Kombucha - have you seen how this stuff is made? Watched a video as my son said we should make as he heard it was good for you... Nasty process!   (Rethinking investment in REED)
- Kombucha starts out as a sugary tea, which is then fermented with the help of a scoby. "SCOBY" is actually an acronym for "symbiotic culture of bacteria and yeast."

Fedex - when was that last time you shipped anything ? Have you noticed the prices? 2 day from Florida to New York - price?

Very interesting story about pharma and charities. Charities set up to pay for prescriptions for people that do not have the means to pay the high prices - seeded by pharma companies and other donors. What a scam! [LINK]

Takata recalls still coming in - upwards of 125 million airbags now recalled. Currently about 1.25 billion cars now in world. So, only 10% but is that low and how is the company staying in business? (Answer: Japan govy will protect)

French police and prosecutors swooped on Google’s Paris offices, intensifying a tax-fraud probe amid accusations the Internet giant fails to pay its fair share across the European Union.

What is our take on markets? Topping pattern or just consolidation? (See chart below)

Housing market is on fire. Is it because of the Fed-Winds that is threatening to raise rates - therefore pushing people to buy now?

Twitter updating the 140 characters again - now @name will no longer count toward limit and they are adding additional features like retweet yourself
- " .@ " no longer going to be used when you start a tweet - "New Tweets that begin with a username will reach all your followers. (That means you’ll no longer have to use the ”.@” convention, which people currently use to broadcast Tweets broadly.) If you want a reply to be seen by all your followers, you will be able to Retweet it to signal that you intend for it to be viewed more broadly."

Study now shows that FitBit trackers may not be calculating heart rate correctly. Seems that could be 14 bpm off when exercising at high levels. (low)

Saudi press: U.S. blew up World Trade center to create War on Terror. Is this just a response to the release of part of the 9/11 papers?

New social experiment contemplated. Swiss may pay people $2,500 per month for doing nothing. (Doesn't the U.S. already have something like that?)

The head of security for the U.S. Transportation Security Administration has been removed from his position, according to an internal TSA memo on Monday seen by Reuters, after the agency was criticized for long lines at airport security checkpoints.

GoPro - CEO on TV today discussing channel inventory reduction plan - stock up 6% (although it was running up prior to the TV appearance). Also, Red Bull and GoPro enter into a strategic alliance - not exactly sure what it is but Red Bull poured in some money and got stock in the deal.

Follow up - Volkswagen... Lawyers are also expected to tell U.S. District Judge Charles Breyer that a settlement over the excess diesel emissions scandal will include "substantial compensation" for owners of 482,000 polluting vehicles, the sources said. An agreement in principle for buybacks and potential fixes was announced in April.

U.S. Dollar hits 7-week high after new home sales. Good for some stocks, bad for others.